Power of the Purse: Middle-Easterners and North Africans in America 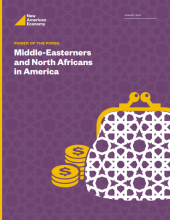 A small but growing segment of the U.S. immigrant population consists of people from the Middle-East and North Africa (MENA). Between 2000 and 2015, the size of this community grew from almost 922,000 people to almost 1.45 million, an increase of 62.6 percent. This paper documents their outsized contribution to the U.S. economy. In part due to their educational levels (48.2 percent hold a bachelor’s degree compared to 30.7 percent of the U.S. population as a whole), and their tendency to gravitate into STEM fields, MENA immigrants are filling key roles in the U.S. economy -- roles which would likely go unfilled were it not for their presence. In 2015, for example, almost 30,000 MENA immigrants were working as physicians and surgeons (7.4 percent of college-educated MENA immigrants compared to only 1.6 percent of U.S.-born college educated individuals). Compared to overall U.S. workers, MENA immigrants were almost twice as likely to be working in a STEM-related field. MENA immigrants also comprised a substantial share of post-secondary teachers in the U.S. (5.7 percent compared to 2.4 percent of the native-born population). As might be expected, their median household income exceeds that of other immigrants, and their tax contributions to federal, state, and local governments are substantial. The report points out that MENA immigrants tend to congregate in certain states and localities, which derive economic advantages through their presence. (American Immigrant Policy Portal)

New American Economy. (2019). Power of the Purse: Middle-Easterners and North Africans in America. Retrieved from https://www.newamericaneconomy.org/wp-content/uploads/2018/07/MENA-Report.pdf