Workers with Temporary Protected Status in Key Industries and States 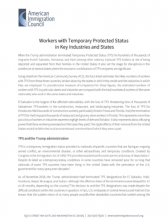 In November 2018, the Trump administration terminated Temporary Protected Status (TPS) for hundreds of thousands of migrants from El Salvador, Honduras, and Haiti -- putting them at risk of being deported and separated from their U.S.-born family members. Created by the Immigration Act of 1990, TPS is provided to nationals of countries facing ongoing armed conflict, environmental disaster or other extraordinary conditions. It provides recipients with a work permit and a “stay of deportation” for the duration of the home country crisis. The American Immigration Council’s fact sheet “Workers with Temporary Protected Status in Key Industries and States” draws its data from a study recently completed by the Center for Migration Studies. Using Public Use Microdata from the American Community Survey from 2012 to 2016, the study estimated that there were 223,000 TPS workers from El Salvador, Honduras and Haiti who work in a variety of key industries particularly construction, food services and landscaping. They reside primarily in California, Florida, Georgia, Maryland, Massachusetts, Nevada, New Jersey, New York, North Carolina, Texas and Virginia. Their removal from the U.S. would be a major blow to many local economies and communities. Losing those workers would represent a loss of $4.5 billion in Gross Domestic Product per year. Over the course of a decade, Social Security and Medicare would lose $6.9 billion in contributions, and deporting TPS workers would cost approximately $3.1 billion. (The Immigrant Learning Center Public Education Institute)