Immigration is Not a Security Threat 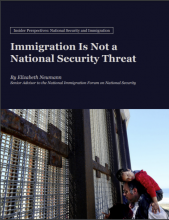 National security professionals agree that border security is important for our national security. And there is bipartisan agreement that the current laws that make up our immigration system are broken. This broken system creates vulnerabilities that individuals with criminal or terrorist intent could exploit. But we cannot fix such complex problems simply by building a wall and conjuring up immoral “deterrents” nor by incorrectly categorizing immigrants themselves as the threat.

The Department of Homeland Security’s (DHS) inaugural Homeland Threat Assessment issued in October 2020 inaccurately listed “illegal immigration” as one of the seven major threats facing the United States — placing it alongside such threat actors as cyberattacks by foreign adversaries, foreign and domestic terrorists, and transnational criminal organizations. For individuals not familiar with security terms, it is a common mistake to interchangeably use words such as threat, risk, and vulnerability, but for DHS to make this mistake suggests a political agenda designed to further create fear. This paper explains why labelling immigration a “threat” is both inaccurate and irresponsible.

Each year that passes without meaningful immigration reforms, however, increases our security risk. Finding a path forward requires the Biden administration and the 117th Congress to reject polarized, all-or-nothing arguments and to curb rhetoric that demonizes immigrants and minority communities, as well as their own political opponents.

Leaders should engage instead in a robust and respectful debate based on facts and a transparent acknowledgment of the security vulnerabilities the current system poses. Reform can be done in a way that upholds the rule of law, is consistent with our national security and economic interests, treats everyone with dignity, and values immigrants’ contributions to the success of our nation.