The Economic Status of Asian American and Pacific Islander Women 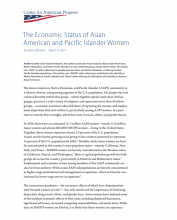 The Asian American, Native Hawaiian, and Pacific Islander (AAPI) community is a vibrant, diverse, and growing segment of the U.S. population. Yet despite the rich cultural diversity within this group, which together speaks more than 100 languages, practices a wide variety of religions, and represents more than 50 ethnic groups, economic narratives often fall short of capturing the income and employment disparities that exist within it, particularly among AAPI women. It is past time to remedy that oversight, which has roots in racial, ethnic, and gender biases.