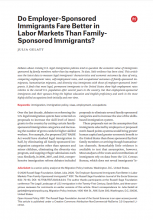 It is often assumed that immigrants sponsored by family members or who enter through humanitarian channels contribute less to the economy than those sponsored by employers. This assumption has led to proposals to scale back family-sponsored immigration, reduce refugee admissions and/or eliminate the diversity visa program in order to make more green cards available for high-skilled workers. Exploring this question of whether employer-sponsored immigrants or family-sponsored immigrants fare better in the U.S. labor market, Julia Gelatt consults data gathered from the New Immigrant Survey, which tracked a group of new lawful permanent residents (LPRs) who obtained green cards in 2003 and followed up with them in 2007-2009. Gelatt found that, while employer-sponsored immigrants showed the highest levels of “human capital and employment,” nearly all LPRs have higher employment rates than U.S. workers generally. In addition, refugees and asylees had the highest rates of self-employment (nine percent in the first survey, 12 percent in the second) compared to other LPR groups (three percent in the first survey, seven percent in the second), and these LPRs overall were well-educated (46 percent of the LPRs considered in the report had a bachelor’s degree or higher in 2003, compared to 27 percent of all Americans aged 25 years and older). Gelatt acknowledges employer-sponsored immigrants have higher employment rates and work in higher-skilled occupations than those not sponsored by employers. However, by the time of the follow-up survey, respondents had “employment-to-population ratios that exceeded those of U.S. male and female workers overall,” and refugees, asylees and diversity visa holders showed the fastest growth in skill level at their jobs. Gelatt concludes by suggesting that, if the U.S. is looking for immigrants with the greatest “labor-market success,” then such success is indeed found in employer-sponsored immigration. However, she argues that policymakers need to consider objectives beyond success in the labor market, such as how LPRs contribute to the overall economy through lower-skilled labor and which immigrants could best complement U.S. workers. Additionally, when immigrants live within family units and share domestic duties, this mutual support might facilitate higher employment rates for other family members. Furthermore, the objectives of immigration policy go beyond economic benefit to the U.S.: family unity has historically been an important goal of U.S. immigration policy, and humanitarian immigration programs were started to support U.S. foreign policy and global human rights, not for the economic benefit of the U.S. (Samantha Jones for The Immigrant Learning Center’s Public Education Institute)