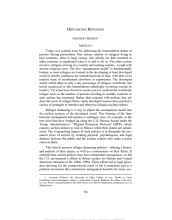 In 2018, nearly 30 million people around the world were displaced by persecution, conflict, violence or human rights violations. Nearly 26 million of these were refugees, and an additional 3.5 million had sought asylum in another country. Although the right to seek asylum is codified in the Universal Declaration of Human Rights and many national constitutions, “Distancing Refugees” argues that developed countries responded to the increase in asylum seekers with efforts to externalize their borders and weaken their asylum systems. Author Geoffrey Heeren identifies the “encampment model,” which has warehoused refugees in developing countries for interminable periods, as one way that developed nations dismantled the normative force of asylum by constructing physical, psychological, and legal barriers between the public and asylum seekers. The encampment model, he argues, shifts the burden of refugee resettlement onto developing nations, thereby jeopardizing the health, food security and living conditions of claimants. “Distancing Refugees” cites past examples of refugee distancing policies, such as the U.S. government’s effort to prevent the entrance of Haitian and Central American asylum seekers in the 1980s and 1990s, to show how these policies can have unintended consequences. The article also analyzes legal challenges to the Trump Administration’s “Migrant Protection Protocol” and explains how a transnational legal process could contest refugee distancing in the long term. (Georgia Whitaker for The Immigrant Learning Center’s Public Education Institute)