An Early Readout on the Economic Effects of the COVID-19 Crisis: Immigrant Women Have the Highest Unemployment 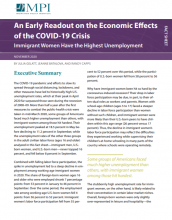 Immigrant women in the U.S. have been most severely impacted by the COVID-19 pandemic in terms of job loss. As noted in this report, the unemployment rate among immigrant women in May 2020 hit its peak at 18.5 percent, declining to 11.2 percent by September. These rates are high compared to other groups (immigrant men, U.S.-born women and U.S.-born men), all of whom sustained unemployment rates below 16 percent in the Spring, falling to under eight percent in September. As the authors argue, this divergence can be partially explained by the fact that immigrant women often perform two roles: worker and mother. In part due to the shift to remote schooling, women with children in school (children between the ages of five and 17) sustained a larger drop in labor force participation than did women without school-age children. Immigrant women, meanwhile, are more likely than U.S.-born women to have children in school (26 percent of immigrant women versus 17 percent of U.S.-born women). Immigrant women workers are also concentrated in certain hard-hit sectors of the economy, particularly leisure and hospitality. Still, immigrant women experienced higher rates of job loss than others with the same occupations, suggesting additional factors, like low educational attainment and lack of social capital, also contribute to their economic vulnerability and high unemployment rates. As the report concludes, addressing the needs of immigrant women workers, e.g. by providing greater access to childcare, is a prerequisite for economic recovery. Prior to the recession, immigrant women made up seven percent of the labor force, with higher percentages in urban areas. Bringing immigrant women and other severely impacted groups back into the labor market, the authors argue, is vital to the U.S. economic recovery. (Jillian DiPersio for The Immigrant Learning Center’s Public Education Institute)