Examining the Economic Contributions of Undocumented Immigrants by Country of Origin 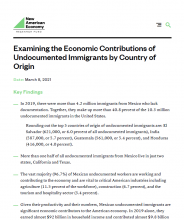 Over the past decade, undocumented immigration has become an increasingly contentious issue in the U.S., with many right-wing politicians decrying weaknesses in border security. Despite the political controversy, however, research suggests that undocumented immigrants play a vital role in sustaining the U.S. economy. In a report titled “Examining the Economic Contributions of Undocumented Immigrants by Country of Origin,” the authors analyze data from the 2019 American Community Survey, focusing specifically on the contributions of undocumented immigrants from Mexico (who constitute 40.8 percent of the total undocumented population in the U.S.). The report finds that 96.7 percent of undocumented workers from Mexico were employed in 2019, comprising 11.5 percent of the agriculture sector, 6.7 percent of the construction sector, and 3.4 percent of the tourism and hospitality sector. In 2019 alone, this group of workers brought in nearly $92 billion in household income and paid about $9.8 billion in federal, state, and local taxes. While the debate over the future of the U.S.’s undocumented population rages on, the data suggests that these individuals play a valuable economic role and are essential contributors to the communities where they work, spend, and raise their families. (Kyla Schmitt for The Immigrant Learning Center’s Public Education Institute)