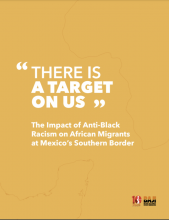 “There is a Target on Us” – The Impact of Anti-Black Racism on African Migrants at Mexico’s Southern Border comes at an important moment and centers the stories of people of African descent migrating through Mexico. As this Report goes to press, the world grapples with the intersections of draconian family separation and detention policies, dramatic disregard of refugee and migration rights, a stunning lack of compassion for people fleeing violence and conflict, and a global pandemic that has shown dramatic racial disparities and devastated Black and Brown communities internationally.

This report offers specific stories that highlight resilience, even in the face of racial discrimination and violence. This includes the Assembly of African Migrants, a source of safety and mutual support for people navigating the life-threatening risks in migration. In addition, this Report offers context for the journeys that test local and national commitments to human rights and international treaty obligations and which, in many cases, are found quite wanting.

This report also offers a fresh and timely analysis of how intersecting policies, procedures, and practices have increasingly eviscerated the rights to freedom of movement and migration rights, including the meaningful right to seek asylum and sovereign obligations under the Refugee Convention and associated domestic law in relevant countries. As importantly, this work highlights how racial bias creates widespread discrimination, racial violence, and diminished access to the resources that do exist for migrants, refugees, and asylum-seekers. As the authors indicate herein, this is particularly true for people of African descent, who face violence and disparagement from the state, with a particular focus here on the United States and Mexico, and non-state actors fail to have the ability to turn to the relevant state authorities for recourse from racial violence from non-state actors.

Morley, S. & Goss, M. (2021, January). “There is a Target on Us” - the Impact of Anti-Black Racism on African Migrants at Mexico’s Southern Border. Black Alliance for Just Immigration. https://baji.org/wp-content/uploads/2021/01/The-Impact-of-Anti-Black-Racism-on-African-Migrants-at-Mexico.pdf