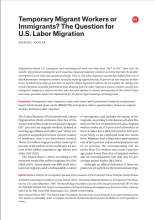 The U.S. labor migration system currently has more temporary workers than permanent immigrants. Employment-based visa data from 1987 to 2017 show that while the number of permanent immigrant workers remained steady, the number of temporary migrant workers increased dramatically, from more than 300,000 in 1990 to more than 1.4 million in 2017, a shift with potentially far-reaching implications for immigrant integration. “Temporary Migrant Workers or Immigrants: The Question for U.S. Labor Migration” analyzes how the U.S. labor migration system has changed since the enactment of the Immigration Act of 1990, the last major legislative overhaul of the immigration system. The article considers the implications of the shift towards more temporary workers, especially the legal roadblock they face to long-term integration and their lack of political participation. This huge population of temporary workers has few options to remain permanently in the country, a situation that affects their ability to integrate and prevents many from earning higher wages. Many are legally underpaid and “indentured” to their employers, but are not empowered to change their situations as complaining could result in the loss of their immigration status and lead to removal from the country. Immigrants with lawful permanent resident (LPR) status, in contrast, are not tied to a particular employer, are entitled to the same labor standards as U.S. citizens, and earn higher wages. The author argues that Congress should reform the immigration system to give more migrants permanent status, with full labor and employment rights and a pathway to naturalization. As the author suggests, an easier transition to LPR status would allow migrants to make long-term investments and benefit from full participation in American society. (The Immigrant Learning Center’s Public Education Institute)