A New Beginning: Early Refugee Integration in the United States 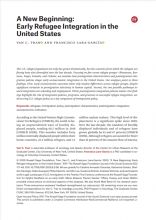 As the number of forcibly displaced people peaks worldwide, debates in the U.S. have recently focused more on refugee admission levels than on policies to facilitate the transition of refugees into American life. In “A New Beginning: Early Refugee Integration in the United States,” published by the Russell Sage Foundation, the authors try to bridge this gap in knowledge by examining factors that influence the integration and success of refugees in the U.S. Specifically, the authors examine the ways in which premigration characteristics, such as education levels, and postmigration assistance policies shape integration outcomes. To do so, the study relies on data from the 2016 Annual Survey of Refugees and focuses on recent refugee groups from five countries: Bhutan, Burma, Iraq, Somalia and Cuba. The authors made three significant findings. First, they found no significant correlation between premigration credentials (like higher education levels, English proficiency and occupation status) and postmigration socioeconomic success, primarily due to the failure of U.S. authorities to recognize foreign credentials. Second, they found that postmigration policies, particularly those focused on education and work, significantly help refugees in achieving stability and success by helping them gain admission to school and training programs  and enter the workforce. Finally, the authors report that successful socioeconomic integration also varies by national origin, possibly associated with racial and ethnic discrimination in the labor market. The study thus highlights the importance of developing refugee training programs and recognizing foreign educational credentials as ways to succeed in the job market. These findings indicate that admitting refugees, while important, is not sufficient in and of itself to ensuring their success, thereby demonstrating the key role that integration policies play in the wider debate surrounding immigration. (Sonali Ravi for The Immigrant Learning Center’s Public Education Institute)